Two days to go for Game of Thrones Season 6 premiere!

The excruciating wait is over. Only two days are left for the Game of Thrones season 6 TV premiere. Well, four days for Indians but you know you guys can’t wait and will torrent it anyway. So, let’s refresh our nerd knowledge from where things left off. And also, let’s talk about Sansa Stark who’s out for Bolton blood. Because it will be amazing to see her turn badass this season and get some good payback for the abuse and horror she faced in her teen life. Who knows, our not-so-favourite weak Sansa might turn into one of our favourite characters.
So, read this recap and be totally prepared because winter is coming.

Daenerys is in the middle of nowhere with her biggest dragon, Drogon after she fled the attack of the Sons of Harpy in Meereen. While Drogon was napping, she went exploring for food and found herself surrounded by Dothraki people. She dropped her ring in the grass so that Jorah and Daario can find her if she gets taken by new Dothraki lords. The mother of dragons is practically in chains, and will be stripped down. Someone has not been kept like a Queen.

When we last saw Lord Commander he was bleeding out into the snow in the courtyard of Castle Black. But there have been soooo many rumors that he’ll return (he looked pretty darn dead). Then again, some have said that he made a small appearance in the Season 6 trailers. Melisandre could probably resurrect the dead, and he dies when Melisandre arrives at the Wall just before the Night’s Watch turned on Jon. So, we'll just have to see about that because till then, we know nothing.

Since Brienne vowed to Catelyn, she has been trying to protect the Stark girls with all her life. It hasn’t been working out so far. At least she killed Stannis (who sacrificed his only daughter for nothing), once and for all for Renly. So that puts Brienne somewhere in the wintry woods outside of Winterfell (close to Ramsay, Sansa, Theon, and probably Pod).

At least Sam had a good time compared to everyone else. He has a girlfriend and he was given leave by Jon to go with Gilly and her newborn to learn about being a maester in the Citadel and crack the mystery of how to defeat the White Walkers once and for all (Jon Snow’s sword works, but what else?). The only downside to his story will be the revelation about the mutiny and his best friend’s death.

Cersei just completed a traumatic Walk of Shame, which does not exactly clear her of her association with the Sparrows. It got her out of her cell, but she’s still in trouble for her sins. She is most likely to choose trial by combat over being punished lying down. For the time being, Margaery and Loras are still locked away in cells, taking their punishment lying down. So, Cersei will come back even stronger and more resolute than ever this season with the powerful Mountain as her champion.

For a short second, it looked like everything was going to work out for both Jaime and Myrcella. He was bringing Myrcella back to King’s Landing, provided that her betrothed, Prince Trystane could come and serve on the council. Jaime even got a bitter-sweet moment with her on the ride back when she told him that she knew he was her father all along. But then, Myrcella dies from the slow poison-ous kiss Ellaria gave her as a parting gift. 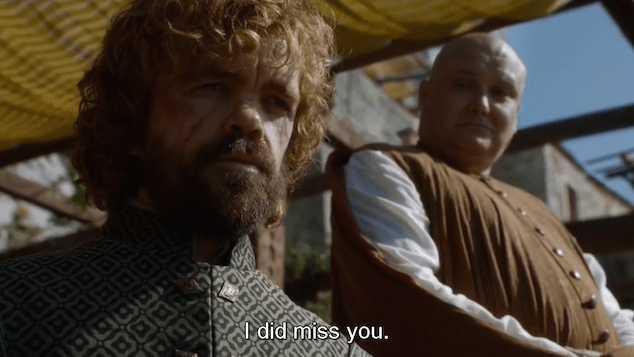 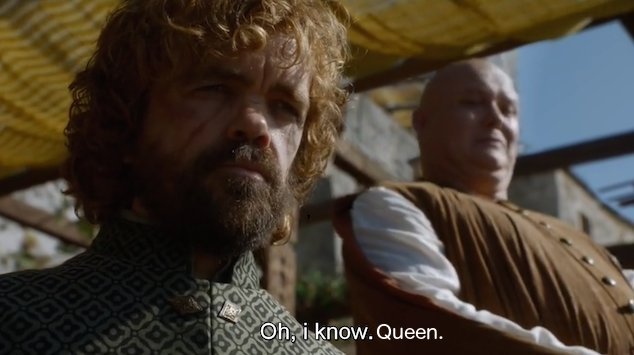 Season 5 started right after our favourite Tyrion had killed his father and his lover, and Tyrion was taking it hard. He managed to escape across the Narrow Sea in Essos. However, After Jaime and Varys helped Tyrion escape, Varys was separated by Tyrion when he’s kidnapped by Jorah, then they were reunited again. Varys stopped Tyrion’s alcoholic stupor by convincing him to help Daenerys Targaryen, and Season 5 ended with Varys working together with Tyrion (and Grey Worm and Missandei) to keep the peace in Meereen while its queen is gone. Also, the trailers show Tyrion unleashing the dragons, which will be awesome.

And don’t forget about Bran and Rickon. Sansa isn’t the only Stark rolling around in the snow. Bran wasn’t there in Season 5 so much, but he certainly didn’t die or disappear. Bran, Meera, and Hodor are currently beyond the Wall, taking up residency with the mystical Three-Eyed Raven and the Children of the Forest, where Bran is learning how to be a Warg.
Rickon, Osha, and Shaggydog took off for House Umber. If they made it safely, they’re at Last Hearth, which is approximately halfway between Sansa and Theon in Winterfell and Jon at the Wall.

Arya spent last season training with the Faceless Men, which is essentially an assassin cult. The cult is in the House of Black and White, where she’s been being trained by Jaqen H’ghar. And she did a pretty good job, too. Until her temper got the best of her, and she killed Ser Meryn, who was on her hit list for ages after killing Arya’s sword instructor.

She was forced to go from one terrifying situation to another. The only flicker of hope for Sansa was finding out that Bran and Rickon weren’t killed after all. Sansa was an important bargaining chip to the Boltons. But she and Theon jumped off a great height into the snow and managed to escape together.

So in Season 6 we can expect to see Sansa, the harassed fiancée of Joffrey, the sceptical niece of Lord Baelish and the sexual plaything of Ramsay Bolton, in a more powerful light.

The girl is gone and in her place is a young woman who is hungry for revenge. In the trailer for season six, she is seen wearing armour and talking about retribution for those who have harmed her and her family. It’s payback time!

Game of Thrones season six will premiere on HBO on 24 April at 9pm ET.

But in India, it will air on Star World Premiere HD this Tuesday, April 26th at 10 pm.

AAP supremo Arvind Kejriwal has already cleared his schedule for Sunday so he can watch the show and review it on Twitter.

Meanwhile, farmers have postponed their plans of committing suicide til the end of the show because they know their death will catch no attention in front of Jon Snow's.

This startup by Kanan Gill & Abish Mathew raises millions, but does nothing.

It’s all about Dicks – The Icelandic Phallological Penis Museum